When in the world are you gonna check on me?

When I first moved to Jackson, my boss told me a story about his then 4-year-old daughter, Claire, coming down the stairs to his study to see when her parents were going to check on her. (She'd been waiting all of ten minutes, pretending to be asleep, for crying out loud.)

I've thought of sweet Claire's frustration several times in my life since then. First it was cute, then it was funny. And sometimes, no matter when it's occurred, it's been relative.

Tonight, for instance. I had a horrible day, capped off with not the greatest night, so every once in a while I'd look at my phone, put my hands on my hips as little Emma Claire did way back when, and wonder when in the world somebody was gonna check on me?

Thankfully, we get what we get when we're supposed to get it, according to His Will. And the lagniappe is just a pocket of grace -- something special we fall into not because we deserve it, but just because.

So even though no one really checked on me tonight as I was "needing," I survived. As did Emma Claire all those years ago. As do we all.

I'm starting the process of moving my old posts over from MySpace, so if you're one of the (un?)lucky peeps who is getting e-mail alerts every time I post a blog, I apologize on behalf of myself! I turned on the option earlier and am not sure how to turn it off. :-\
at 12:33 AM 1 comment: Links to this post

After blogging for a couple of years on MySpace, I've decided to become a real blogger and start posting these mini-journal entries on blogspot instead of e-mailing the blogs to friends and family who are not on MySpace.

I hope to be as good at for-real blogging as my friends Kristen and Shawn, who do fantastic jobs of updating readers on their worlds and the interesting happenings that go on in them.

So who knows? Maybe I'll post a really real blog really soon!
at 7:07 PM No comments: Links to this post 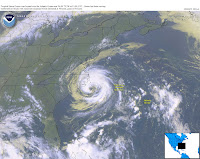 Thanks so much to those of you who have checked on me, my townhouse, and my family. It really means a lot, especially considering that from what I understand, the national and even regional news media is downplaying just how bad Gustav hit Baton Rouge. Once again, New Orleans seems to be getting the limelight. Thankfully, it doesn't seem to have been hit as badly, but it's always frustrating when it seems it's the only city to get any media attention. I am even being told that the Weather Channel is saying this storm was no big deal. Trust me, it was a big deal.

Having grown up on the coast with hurricanes and experiencing the three-hours-away effect that Katrina had on my family and hometown, I would definitely say I'm not a stranger to tropical weather. Baton Rouge, however, has apparently not had a storm of this magnitude or damage since the 60s, and there are many disaster areas in the city and surrounding communities.

I am staying with my coworker Shannon. She lives very near Angela, and we are able to save on gas by riding to work together. We checked out my townhouse yesterday and I was thrilled to see it's still standing, but I cannot get back there due to flooding from one direction and downed power lines and trees in another direction. Getting out of there was hairy, to say the least. Shannon drove and did a great job. If I had been her, I'd have needed a tranquilizer afterwards! Since I can't get back to my place for a while, I will be staying with friends until I can. I'm sure you can guess that there's no power (thankfully we just got it at one of our work sites, so I can sit in A/C here!). When not at work, we're all sticky and nasty, but hopefully it won't last as long as my parents had to endure the heat after Katrina! Ugh. Bless their hearts. So far, I have heard of six storm-related deaths, which is terrible but minor compared to what it could have been. I cannot imagine the hit BR would have taken if Gustav had been higher than a Category 1.

I ask for your prayers as BR recovers. Thankfully, there will be much less rebuilding than had to be done with Katrina, but much repair will be necessary. As many of you know from Katrina, tension gets high when electricity is off and there is a shortage of gas and ice. Thanks so much for your thoughts and prayers. We are feeling them!

I cannot express how much I appreciate those of you who have checked on me throughout this harrowing time. It has meant a lot!

i had no idea. their has been little or no mention of any damages. you and yours are in my prayers

Maybe if you would all act pitifully helpless and blame your problems on other people, then you would get more attention in the media. Hard working, self sufficient, motivated people with functioning brains make for really boring news stories.

People Who Read My Blog